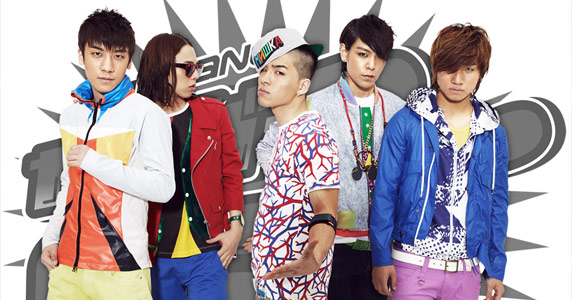 On June 25th, more than 2000 people tried to fit inside a 400 person venue for Big Bang’s “My Heaven Event.” This time they held it outside at Yoyogi Park, and the turnout was even bigger this time around. More than 8000 fans attended Big Bang’s Live Event at Yoyogi Park in Japan. Anyone who displayed their Japanese singles of either “My Heaven” or “Gara Gara Go” were allowed free entrance to the event.

Even though the weather wasn’t cooperating with a lot of rain, fans still stood by patiently waiting to see Big Bang perform. Big Bang performed a total of 4 songs including both “My Heaven” and “Gara Gara Go.” They also announced they will be releasing a new Japanese full album on August 19th titled “BIG BANG”, which shares the same date as their official debut at the YG Family concert, held on August 19, 2006 at the Gymnastics Arena in Seoul Olympic Park. Big Bang also stated that they will be releasing a “Best of 2006-2009” compilation album which will include all their past hits.

GD is so cute!! ahaha! Seungri and Daesung didn’t speak at all >_<
Taeyang so handsome…T.O.P. so cool…
Big Bang rocks the night! oh eh oh…;)

This entry was posted on July 11, 2009, 8:15 am and is filed under Big Bang. You can follow any responses to this entry through RSS 2.0. You can leave a response, or trackback from your own site.