Top star Rain has been received a love call to appear in a new hollywood movie from the Warshawskis , the director and producer, once again.

In addition, he has also received the invitation to appear in 3 new hollywood movies from the world famous film distributor.

This third invitation has been sent by the Warshawskis while his first leading movie ‘Ninja Assassin’ opening on November has been well received and selected as an expected movie by powerful media, which has captured the attention more.

Rain debuted in the hollywood through ‘Speed Racer’ produced by the Warshawskis in 2008, and first starred in ‘Ninja Assassin’ produced and scripted by them. The Warshawskis are notable for their film production ‘The Matrix’ series.

The American movie site Collider posted its review of ‘Ninjas Assassin’ on the internet last March. “Compared to the supporting role in ‘Speed Racer’, Rain has made a lot of progress in this movie.” “The public will surely like this movie. It is like ‘Kill Bill’ with better CG.”

Even in the American movie database IMDB, evaluations say that “after the movie, over half of the people shouted out ‘it was the best’ .”

After giving his careful consideration on all matters, Rain plans to decide on his next movie.

With 2PM already triple crown winners of Mnet M! Countdown thanks to their hit “Again & Again”, JYP’s heptagon was not eligible to win this week – but damn, did they put on a show. Doing a Rain tribute for the M Countdown: Heroes segment, 2PM pulled off an impressive dance rendition of two of Rain’s signature songs: “Bad Guy” and “Rainism”. The group donned guyliner and showed massive man-cleavage for the performance, which thrilled Hottests even though Nichkhun was absent due to his participation in a concert in his native Thailand.

END_OF_DOCUMENT_TOKEN_TO_BE_REPLACED

World star Rain has is now the new face of the cosmetic brand Nature Republic. His modeling contract is worth 1.5 billion won for the next two years. He’s already begun shooting CFs since April in Brisbane, Australia. The shoots are mostly of the world star barefoot in forests and under waterfalls and such.

END_OF_DOCUMENT_TOKEN_TO_BE_REPLACED

Korea-Thailand Exchange Center did a survey on 27th February until 26th March. 489 Thai’s was surveyed four times on different categories.

Based on the result of the survey, Bae Yong Joon gets 22.8% of the voting,becoming the most popular male actor. Won Bin and Kim Rae Won was the first and second runner up with 18.8% and 13.3% each.

For female actor, Song Hye-Kyo won first place with 21.75% of the vote while Yoon Eun-Hye 20.4% and Lee Da Hae 20% follows tightly at the back. They gained so much popularity because one of the TV channel in Thailand was airing << Winter Sonata >> and << Autumn In My Heart >>.

For the singers category,Wonder Girls gets the crown with 17.2% of voting, becoming the most popular group in Thailand, Rain with 17%, Super Junior with 15.5%, Big Bang with 15% and DBSK with 14.5% follows up.

During the survey, Wonder Girls held a successful concert and their popularity shot up tremendously. Based on the result of analyzing, the image of Korea was high affected by Kpop because 99% of the respondents said that Korea’s image was better compared to five years ago. When they’re asked for the reason,they said that its because they’re affected by Korean drama and singer.

Rain – Instead of Saying Goodbye [mp3DL]

Battle of the Pop: Boys Vs. Girls

Channel[V] came up with another battle between artists. If last time they caught the attention of many people elfs maybe (again) they may be able to fool a lot of fangirls into their trap again.

The new battle is entitled Battle of the Pop: Boys Vs. Girls. So are these guys sexists? It’s gonna be a battle between fangirls and fanboys. Round 1 consists of 32 artists (either solo or group). Of course you can’t expect these guys to pick out many interesting artists. I mean even the the songs they know on the particular artist are way outdated. They should have at least done their research.

The match-ups I find quite interesting are… 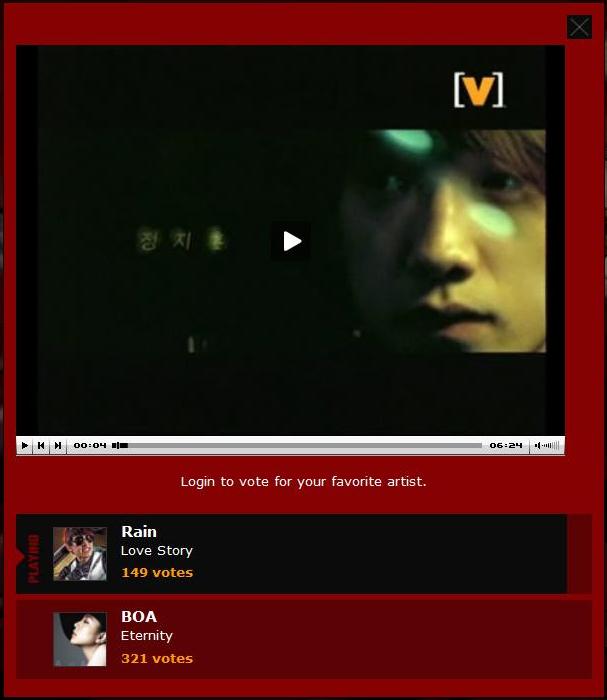 Super Junior Vs. Girls’ Generation/SNSD
Picking Gee is forgivable but geez…they should have at least chosen “Sorry Sorry” for the featured song of SJ especially that they used the same song “One Love” on the previous battles. 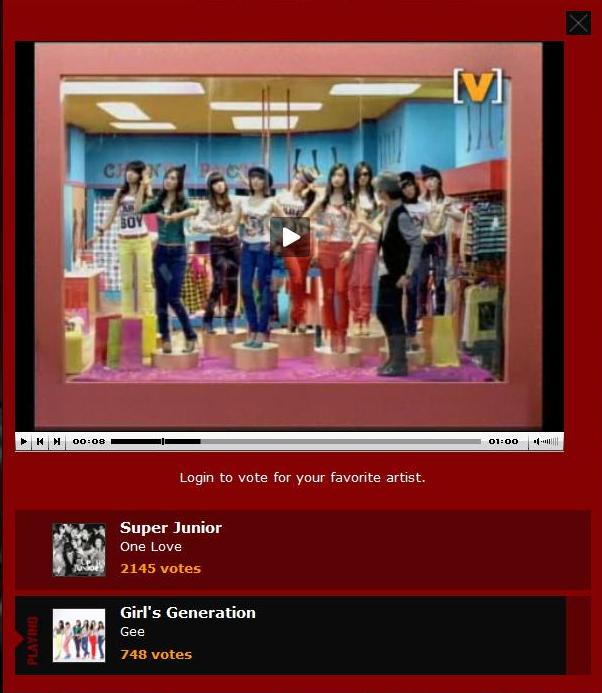 END_OF_DOCUMENT_TOKEN_TO_BE_REPLACED

Descendants of the Dragon: Jackie Chan and Friends Concert Successful

Posted by Minnie-chin in Uncategorized on May 3, 2009

Jackie Chan, leading an army of performers, hosted the “Descendants of the Dragon: Jackie Chan and Friends” concert at the legendary Beijing National Stadium, aka the Bird’s Nest with 70,000 in attendance. It was the first major event that was held at the stadium since the closing ceremonies of last year’s Summer Olympic Games.

Jang Ri In sang her song “I Will” on the biggest stage of her life.

Videos & more of Rain and Super Junior after cut