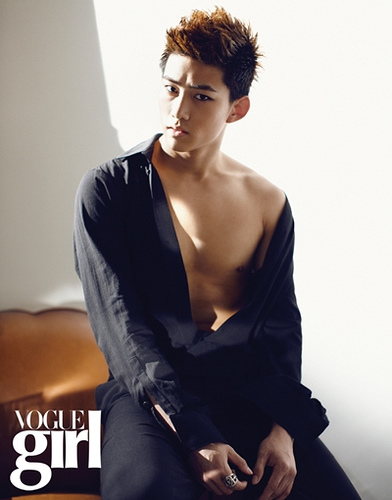 Well, who wouldn’t want this gorgeous guy right here? I bet most of you already know about this extremely disturbing bit of interest-seeking act of Taecyeon’s fangirl. I feel sorry for the guy. Can’t imagine how he feels 😦

To those who haven’t encountered it yet, what I was talking about is a fan letter dedicated to Taec written using blood from the writer’s menstruation. blech! Really disgusting.

as said from allkpop – this was blood from her period with a sprinkle of pubic hair.

Here is the photo of the said letter. Please don’t continue if you are easily disturbed ;p

I dedicate to Taecyeon my period blood letter
Ok Taecyeon, You cannot live without me
Sprinkled with a few strands of my pubes

Of course, Korean netizens never believe anything, so after this picture was posted on the web, it received a rush of comments all saying it was fake. I’m guessing that this insane little girl got offended, so she posted a picture of her bloody pad afterwards to prove her writing was truly “genuine.”

After the post, the enraged/disturbed netizens hunted down her minihompy and began to attack her with hateful comments. The fangirl quickly posted:

“I am sorry. I apologize for bothering Taecyeon as well as his fans. I didn’t know it would get this big. I am not a *SahSaeng fan, but just an obsessive girl.”

Her minihompy is still being flooded with haters even after the apology, and the fangirl has now threatened to file a lawsuit against them.

*“Sah Saeng Fans” (사생팬), where Sah Saeng is short for Sah Saeng Hwal, which means “private life.” As the term suggests, these girls’ hobby is to observe the stars’ personal lives.

I copied in blockquote verbatim from allkpop since there is no better way of reporting this news. Plus, i don’t want to waste time reprhasing the same thoughts. This girl I pity so much more for Taecyeon. If I was beside him – and betting he got really frustrated not to mention disgusted – I would hug him.

Hottests, I know this is frustrating. Enough said. It will pass.

This entry was posted on December 20, 2009, 5:20 pm and is filed under 2pm. You can follow any responses to this entry through RSS 2.0. You can leave a response, or trackback from your own site.